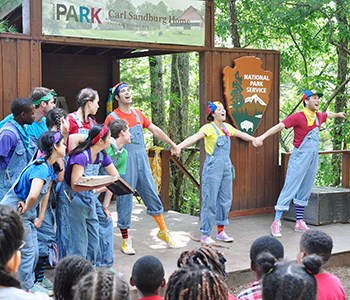 Starting in mid-June, Carl Sandburg Home will offer Rootabaga Express!, a free summer children’s plays Apprentice actors from the Flat Rock Playhouse Vagabond School of the Drama will perform Rootabaga Express! on Thursdays and Saturdays at 10:15 a.m., from June 16 to August 13. Carl Sandburg created his own version of American fairy tales when he published Rootabaga Stories (1922) and Rootabaga Pigeons (1923). He replaced the European fairy tale cast of princes, princesses, castles and kingdoms with icons American children would recognize — taxi-drivers, movie actors, skyscrapers, prairies and automobiles. Rootabaga Express! brings the stories of the Five Rusty Rats, Bimbo the Snip and more to life.You’ll meet new characters and journey farther into the Village of Liver and Onions and Sandburg’s imagination than ever before.

The free 30-minute shows are appropriate for all ages and are held rain or shine at the amphitheater.  For young visitors who attend the plays, there is a Rootabaga Junior Ranger program available.  Activity sheets will be available at the amphitheater after the play and can be turned in at the Sandburg Home for a limited edition “Rootabaga Ranger” badge.